‘Els Ports treasures in its mountains, rivers and valleys, in its villages, streets and buildings, in the look and way of living of its inhabitants, a legacy that has forged its identity. By walking through this land, visitors are able to experience all stages of history, breathe the atmosphere in which dinosaurs, artisans, kings, nobles, shepherds, guerrillas and other legendary characters lived.’ 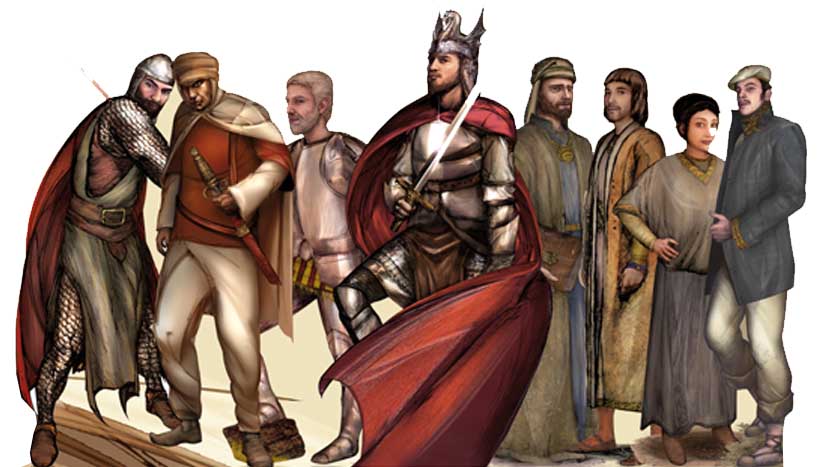 Land of frontiers, crossroads and confluence of people and cultures. The adventure of our history begins in the Cretaceous period when the mountains were just small hills on the seaside, and its flora and wildlife were appropriate for a climatic and geological era in which they lived species already extinct. Hundreds of dinosaur fossils, witnesses of that era, have survived until today in the clay soil of the region. Among all of them, the Iguanodon stands out, as well as the remains of marine wildlife and limestone algae. It deserves special mention the recent discovery of a new dinosaur species, unique in the world: the Morelladon Beltrani.

After the extinction of dinosaurs, and over the millennia that came after, there were significant climate changes that produced the recoil of the coast, bringing to light the extraordinary geological formations that constitute the mountains of Els Ports. Across our land, walked the first Paleolithic human tribes, leaving traces of their material culture, such as arrowheads, percussion hammers, beads of necklaces, pottery and some remains of homes. With the appearance of the Neolithic, the rivers, landscapes, flora and wildlife around them inspired the first artists who painted in rock shelters the extraordinary paintings of Levantine Art, unaware of the historical and cultural transcendence of their legacy.

Not only was the Metal Age a period marked by enormous cultural changes and advances, but it also accentuated the characteristic that identifies this land: the continuous movement of people from distant places. The shepherds crossed mountains and valleys, their cattle drank in our rivers and their wise eyes analysed the paths in which people had begun to walk centuries before, allowing the communication between the inland and the coast.

Eventually, the nomadism of previous periods, evolved towards a sedentary lifestyle, which led to the establishment of small population centres in mountain peaks. The Iberians built watchtowers and began to defend their territory, Ilercavonia. Its capital, Bisgargis, named by Ptolemy, has traditionally been in our land. Amid all the towns and lands they controlled, a small settlement gained more and more momentum in terms of territorial level and with the arrival of the Romans was consolidated as the administrative capital of a vast territory. It was none other than Lesera, the only town of this period discovered in the province of Castellon.

The end came at the hands of a great crisis, which over the 3rd century established a new system of rural population, scattered throughout the territory.

THE ARRIVAL OF
ISLAM

The values that idenlify Els Ports, a place where the peoples, places and cultures, coexist and struggle to survive in a rough area, were undoubtedly influenced by a previous time of uncertainty, with people coming from and going to distant lands.

Suevi, Vandals, Visigoths and Alans walked throughout these mountains, until the arrival of Islam in the year 714, which meant a radical change in the language and customs of the area.

It was at that time when it appeared the awareness of territorial unity, which is the assimilation of certain limits that responded to a land with shared values and specific identity features: the land that now comprises the region of Els Ports.

The knight Blasco de Alagón, Senior Butler of King Jaime I conquered the area and granted special legislation, the “Jurisdiction of Sepulveda and Extremadura,” which responded to the special consideration that the king and his subjects had regarding Morella and the villages that came to depend on it, specifying the entire system of uses, customs and its regulation through “Els Establiments”.

Knight Blasco de Alagon, Greater Butler of King James I The Conqueror, conquered the region and granted a special legislation, the “Fuero de Sepúlveda y Extremadura”, which was a proof of the special consideration from the king and his subjects towards Morella and the villages that came to depend on it, specifying all the system of uses, customs and regulation.

The towns we know today have their roots in the Middle Ages, a time when the palaces of the nobles who accompanied King James I The Conqueror in his conquest were built, or in the following repopulation, in which they were granted both concessions of mills and furnaces that even today bake bread and pastries consumed by residents and visitors. (el forn de Forcall data de 1246 i és considerat el més antig d’Europa en funcionament. Visita’l…). The rich palatal heritage was born from the enrichment of those pioneers in the trade of wool, silk or saffron, products exported to Italy and appreciated and praised by travelers during the following decades.

More information visiting the “Route of the castles and palaces”

From the 13th century to the 16th, the craft workshops controlled by the gremis (guilds) existing in the medieval town of Morella created great works of jewelry, altarpieces, wood carvings, etc. which are currently distributed around the world and some of them now surprise us almost in every single corner, church, museum or building in the towns of the region. For nearly four centuries, the towns that depended on Morella fought for their independence from the mainland because of the harsh burden this imposed on them and their reluctancy to be subdued.

Kings, popes and saints visited our towns, which witnessed major historical events as when around the year 1414, the saint Vicent Ferrer, King Ferdinand I of Aragon and Benedict XIII, known as Papa Luna in Spanish, met in Morella trying to solve the Schism suffered by the Western Church.

More information visiting the “Route of the churches and hermitages”.

The change in the legal structure of the towns of Els Ports became effective in 1691, when the independence brought a new impetus to the towns which, in the following centuries, were to strenghten their distinguishing features. In each one of them, gradually since the Middle Ages, different labours based on manufactured products were developed: espardenyes (espadrilles) mainly in towns such as La Mata, Villores, Todolella or Forcall; faixes (sashes) in Cinctorres and Portell; mantes (blankets) and other textiles in Morella, Villafranca or Herbers, etc., as well as the profession of coal merchant in Vallibona. The peculiarity of the professions carried out in Els Ports, as well as the reason of the existence of certain products not only resided in the proximity of raw materials such as hemp or forests, but in the special ability of people to create them. Hands that inherited the good work of all those who fought to live in this rugged territory, inheritants of the skill, artists and craftsmen, since prehistory.

Especially cruel was the 19th century, when the Spanish War of Independence and the Carlist Wars had special virulence in Els Ports, one of the first areas in Spain in which the support to Carlos Maria Isidro was proclamend in 1833, and the last one to fall into the hands of liberals, led by Baldomero Espartero. Amid the First Carlist War, the figure of Ramon Cabrera, byname El Tigre del Mestrazgo (“The Tiger of the Maestrazgo”) grained momentum, followed by other guerrillas in the region that have achieved a legendary status: “el Groc” from Forcall, “El Serrador” from Vilafranca, “Pitarch” from Vallibona or “La Cova” from Benassal.

In Forcall you can find the “Groc Route”.

It was in the very middle of this century when factories in the river emerged, which used the hydraulic force of the mighty rivers to run the machinery of the fabric manufacturing. Special mention deserves the factory Fàbrica Giner in Morella, which consitutes an interesting model of industrial colony and which was working until the first quarter of the 20th century.

Throughout the 20th century, all towns in Els Ports began their demographic decrease, the main characteristic that identifies them today: its low population density.

The 20th century was affected by the events that also affected the entire country. The Second Republic, Franco’s dictatorship and the post-war period indicated the end of the first half of the century. Certainly, it should be mentioned that this was one of the areas whose people most fought against Franco’s regime after the war, through the maquis, such as “La Pastora”. The end of the dictatorship and the arrival of democracy would mark the second half of the century.

Els Ports has a fascinating history, and it is still alive. Visitors can feel its history in every single corner.

Visit the village of the shepherdess